INTO THE TRANCE STATE 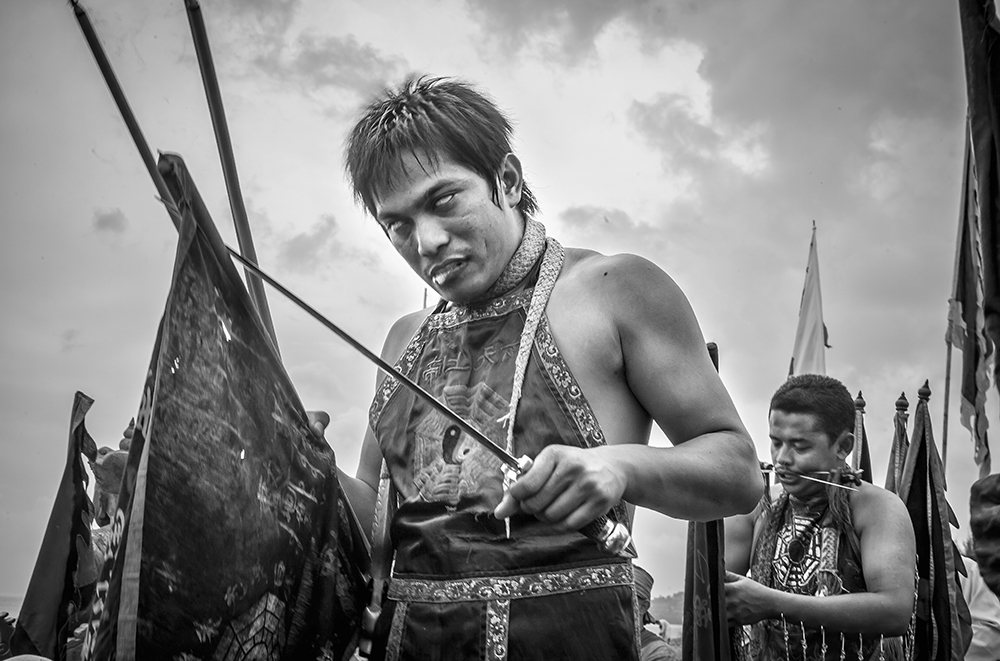 The series represents the deep states of trance undergone by the mediums at the Nine Emperor Gods festival, which takes place every year in Asia. The Gods will travel through the seas and possess the human mediums who will be waiting for them at the temples or shrines disposed before the sea. At their arrival, the mediums possessed by the Gods will fall in and out of a deep state of trance and perform feats which defy human logic, such as walking over fire, or perform acts of self mutilation, all to show the supernatural power of the Gods. 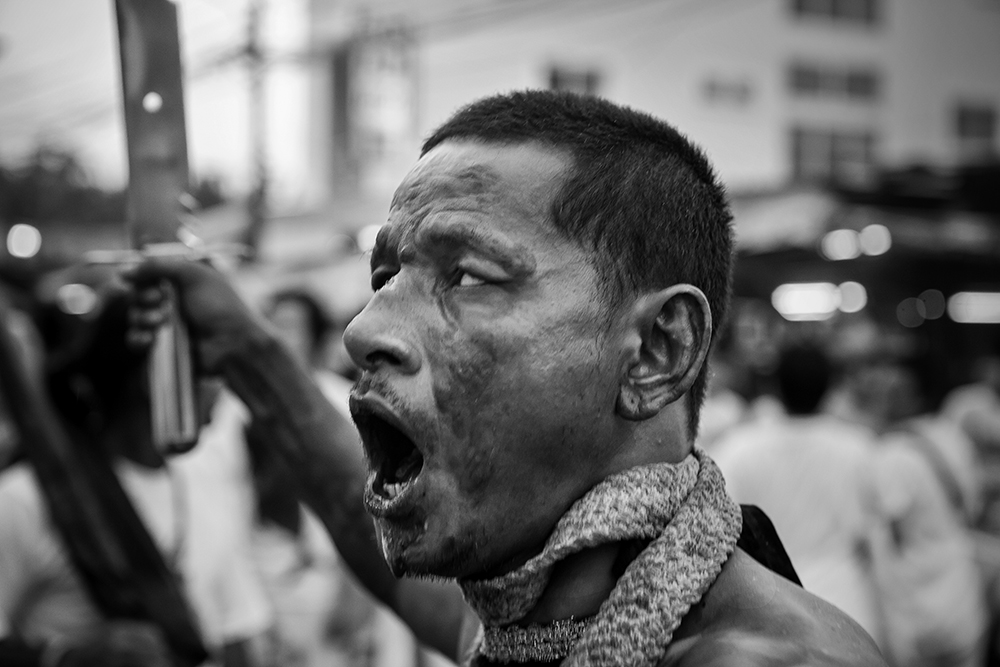 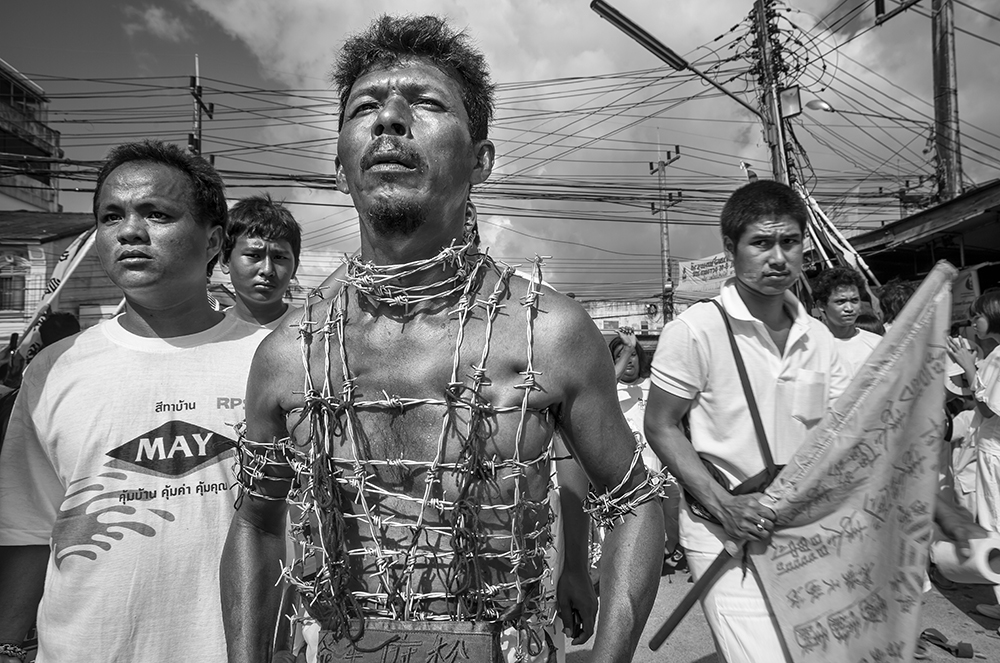 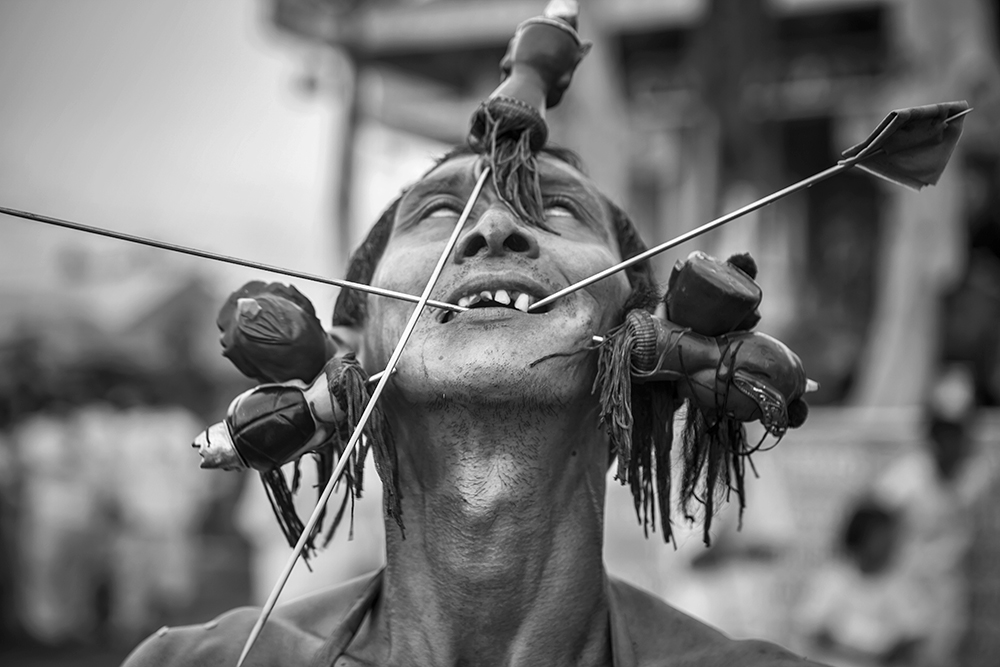 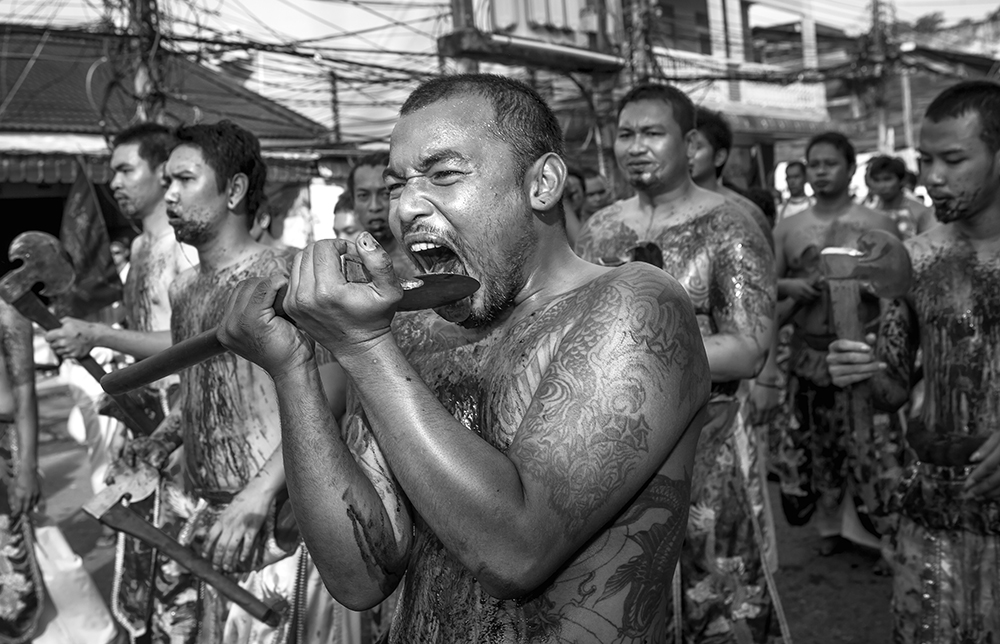 Every year and throughout some Asian countries, the Nine Emperor Gods festival takes place and many mediums will wait for their arrival before the shrines of many Chinese temples. The Nine Emperor Gods will arrive to the human realm through the oceans, and in the precise moment of the arrival and until the moment of their departure, they will require of human mediums that they will possess along with many other Gods and Goddesses who accompany them, in order to use the mediums for purifying and cleaning the sins committed by the human society. This series represents a study of the different stages of trance that some of the mediums go through, being the case that some of the feats performed by them openly defy any logical explanations. The first image shows a medium who had been possessed by the spirit of a Warrior God, and waits for the Gods along with some other mediums by the sea. His trance state had been so deep that his mouth had been foaming continuously for more than half an hour and he had been screaming, grunting and shaking his head totally oblivious to his surroundings. The second one represents one of the main mediums of one temple, at the very precise moment of the arrival of the Gods , showing a violent possession outburst in which he started running and jumping around with his machete and a whip wrapped around his neck to scare the evil spirits. Later on and after cutting repeatedly his tongue, he used his blood and his finger to sign the temple document used to welcome the Gods. All the mediums will remain falling in and out of the state of trance during nine days, and performing acts of self mutilation, piercing, walking over sharp ladder blades or over fire, ending their apparent ordeal in a state of exhaustion , but, surprisingly enough unharmed or ,in the case of them presenting wounds their recovery will be incredibly fast. Perhaps one of the fastest recoveries is that one of the mediums who carry axes through various processions and who, in order to defy the evil spirits by showing their supernatural power will cut their tongues with their axes so many times that frequently an almost severed piece of severed tongue will hang from their mouths and their bodies will become totally covered in blood. After their state of trance is over, they will all heal in a matter of days. All these mediums present the so called Shamanic Trance, in which although they are in a dreamlike state, they seem to be under total control of their actions, and according to what they say, they can leave their bodies and go into the non physical reality where they can visit the heavens and hells of existence, communicate with the Gods or souls, and gain information which can be used to help the human beings to follow the right path. They operate within a distorted sense of space and time.